by Helen Berry  (available in paperback from October 2012) 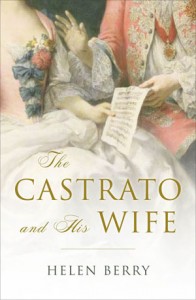 The opera singer Giusto Ferdinando Tenducci was one of the most famous celebrities of the eighteenth century. Mozart and Bach both composed for him. He was nothing less than a rock star of his day, with a massive female following. He was also a castrato. Ranging from the salons of princes and the grand opera houses of Europe to the remote hill towns of Tuscany, Helen Berry’s compelling account of the unconventional love story of the castrato and his wife offers fascinating insight into the world of opera and the history of sex and marriage in Georgian Britain.  Berry vividly describes how women flocked to Tenducci’s concerts and found him irresistible. Indeed, his young singing pupil, Dorothea Maunsell, found him so irresistible that she eloped with him. A huge scandal erupted and her father persecuted them mercilessly.  Dorothea joined her husband at his concerts, achieving a status she could never have dreamed of as a respectable girl. She also wrote a sensational account of their love affair, an early example of a teenage novel. Embroiled in debt, the Tenduccis fled to Italy, and the marriage collapsed when she fell in love with another man. There followed a highly publicized and unique marriage annulment case in the London courts. Everything hinged on the status of the marriage, whether the husband was capable of consummation, and what exactly had happened to him as a small boy in a remote Italian hill village decades before.

Telling the remarkable story of Tenducci for the first time, The Castrato and His Wife is both an exhilarating read and a perceptive commentary on the meaning of marriage, one that still resonates today.

What the critics say:

Berry’s recreation of the life, career, relationships and legal troubles of the celebrated Italian castrato Giusto Ferdinando Tenducci dances along, taking in a galaxy of themes: gender and sexual identity, the body and medicine, masculinity and virility, patriarchy and family, the legal technicalities of marriage, musical culture in Italy and Britain, Protestant taste, politeness and manners, the commercialization of artistic culture, print and celebrity… Berry has crafted the tantalizing tale of a baroque enigma. A consummate achievement, as light, bright and sparkling as a glass of prosecco.

– Prof. Amanda Vickery, author of Behind Closed Doors: At Home in Georgian England

Helen Berry’s fascinating biography focuses on one of the most celebrated of castrati… deconstructing Dorothea’s account of the affair, assessing the intriguing third-sex allure of the castrati, and deploying her considerable skills as a historian and writer to re-create with panache the world in which Dorothea and Tenducci both flourished and floundered.

Berry’s compelling book is about more than the horrors of castration.  It offers real insights into the life and work of a highly talented performer who made continual journeys across Europe to sing in the concert halls and opera houses of London, Edinburgh, Paris, Rome, Dublin and others…an entertaining glimpse into 18th-century showbusiness.

The Castrato and His Wife on dovegreyreader

One thought on “The Castrato and His Wife”